Associate of Arts in General Studies

Prepare to take the next personal, educational, and professional step.

Take the initial step in your educational journey and strengthen key skills like professional communication and critical thinking by earning your Associate of Arts in General Studies with SNU! Uniquely designed, SNU's associate program is made up of 10 general education courses and 10 elective courses allowing students to customize their degree to their individual interests and career goals.

By attending class one night a week or entirely online, you can earn your associate degree in as few as 24 months with books and materials delivered right to your door.

Graduate in as few as
24 months

Learn one night a week, 100% online, or a combination of both!

Fill out the form below and an enrollment counselor will reach out!

Earning a degree while working full time or raising a family has never been more possible. Here’s why adult students are thriving and reaching their goals at SNU: 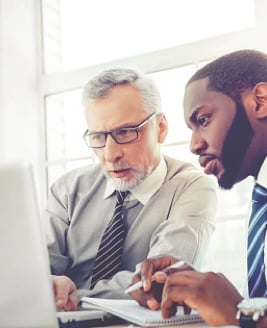 This degree prepares students for more than the practical duties of their future career—it prepares them to enter the field as an insightful, well-rounded individual ready to make a difference. For an in depth understanding of learning outcomes, review the courses and descriptions below.

A General Education course that develops writing skills through expressive and explanatory writing, often in the context of the student's own experiences.

General Education course that continues to develop writing skills in more formal and academic contexts through practice in rhetoric, argumentation, and research.

A beginning course which stresses that communication is an essential element of human existence. Basic communication theory, interpersonal skills, and public speaking skills are addressed.

This is an introductory course providing computer experience in a wide variety of application software. Its purpose is to help the student increase confidence on a computer while facilitating a broad range of possibilities which may be used throughout their college and professional life. Applications include word processing, electronic spreadsheets, presentation software and desktop publishing.

A one semester course in which students are introduced to how a Christian perspective creates and deepens meaning in cultural, personal, social, and aesthetic issues; how to evaluate moral and ethical choices in light of sound interpretations of Christian scriptures, Christian traditions, and the Wesleyan theological perspective; and how Christians operationalize that analysis through active stewardship and service.

Old Testament Literature and Life is a General Education course. Its purpose is to identify the basic knowledge of the Bible - story line, main characters, books, great chapters, and teaching, and develop skills in understanding and communicating their meaning - that is expected will be known by all members of the SNU community of faith. This course is the product of the conviction of the SNU Faculty that a working knowledge of the Bible is essential for the fulfillment of the University mission to build responsible Christian persons. (3 Credit Hours)

New Testament Literature and Life is a sophomore level, General Education course. Its purpose is to identify the basic knowledge of the Bible - story line, main characters, books, great chapters, and teaching, and develop skills in understanding and communicating their meaning - that is expected will be known by all members of the SNU community of faith. This course is the product of the conviction of the SNU Faculty that a working knowledge of the Bible is essential for the fulfillment of the University mission to build responsible Christian persons. (3 credit hours)

ARTISTIC EXPRESSION
Select 1 of the following.

A course designed to introduce students to the processes of critically reading written texts (fiction and nonfiction), visual texts (film and other forms of media), and oral texts (performance and oratory). It will provide a variety of tools with which to analyze and evaluate these materials within the context of ethnic, cultural, and personal identity. Focus will be on global literatures as well as literacies appropriate to their various histories, cultures, and themes. Prerequisite: Passing grades in Composition I&II (ENGL 1113/1213) or equivalent AP or CLEP credit (required)

A one semester course in which students learn to evaluate artistic expressions, including the fine arts, music, drama, literature, media, and human movement (i.e., dance, sports), through the use of political, sociological, anthropological and aesthetic theories.

An exploration of the art, architecture, music, sculpture, and popular culture in various periods of the Western tradition. Emphasis will be given to cultural field experiences in the arts using the resources of the metropolitan Oklahoma City area. Prerequisite: Aesthetics (G S 1413) recommended.

This upper-division course provides an examination of the American film history and culture. This course is a survey of the American Film industry as an art form, an industry, and as a system or representation and communication.

This course introduces digital photography as a medium and an integral part of today’s digital literacy. The course includes the study of photography as an art form, as well as, exploring hands on manipulation of camera controls and post processing using Adobe Lightroom Software.

The course is designed to allow students to gain knowledge of the roots of popular music and an appreciation for musical concepts. The course seeks to chronicle the beginnings, evolution and styles of our popular American music culture through discussion, listening and research" our normal listening habits. It allows students to become acquainted with the important personalities and important movements of popular American music and to continue the process of becoming critical listeners to all types of music.

The course, Educational Foundations of Teaching Practice is a study of historical and current educational philosophy, theory and practice regarding the development of the teaching profession. In addition to the historical context, current aspects of teaching and the role of the teacher in effective classroom instruction and management will be explored and examined, with practical information that will assist those individuals who desire to pursue careers in classroom teaching.  Lecture, problem-solving/case study, video review, and discussion formats will be utilized.

SPECIAL NOTE:  This course will NOT qualify under Professional Education requirements for a traditional teacher education program.

This course is designed to introduce the teacher candidate to psychological principles and theories to demonstrate how this information can influence teaching decisions for maximum learning in the classroom. The course addresses the differentiated classroom through multiple developmental theories and instructional strategies related to diversity, and acknowledges ethnic, gender and special education needs. The course also provides information related to interpreting and understanding standardized tests for the purpose of improving the teaching-learning process and providing teacher candidates the opportunity to incorporate appropriate assessment strategies.

A systematic analysis of some of the significant social problems of our world today, emphasizing the contributions which social science can make toward the understanding of these problems.

Sociology of the Family (3 credit hours)

A study of the origin, development, functions, and problems of a basic social institution of our culture, the family. The effect of modern social and economic conditions on contemporary family life are reviewed.

An overview of the US Juvenile Justice System with an emphasis on the history and development of philosophical approaches to juvenile delinquency. Examination of theoretical paradigms, current issues, and social problems.

Introduction to the Holocaust (3 credit hours)

This course seeks to engage learners in a critical consideration of the moral and religious and theological implications of Nazi German’s “war against the Jews,” the intentional and calculated destruction of some six million European Jews (accompanied by the enormous suffering and losses experienced by other “undesirable” groups) which is referred to as the Shoah, or Holocaust.

This course offers an overview of the development of human civilization from the Atlantic Revolutions to the present. It will analyze social, political, economic, moral, and ideological foundations important to the development of today’s global society.

Diversity in the Workplace (3 credit hours)

This course is designed to expand the student’s understanding of diversity within organizations, including cultures that are not derived principally from the European experience. A comparative perspective allows students to explore key racial/ethnic groups as well as protected classes of individuals. The goal of the course is to cultivate insight and respect for diversity by requiring students to explore a world quite different from their own.

This is a survey of the cultures of our world with a special look at non-western societies. The course will provide tools for more effective intercultural communications as well as giving us a mirror in which to see our own cultural groups more clearly.

Introduction to World Religions gives learners an introduction to some of the major world religions like Hinduism, Islam, Buddhism, Judaism, and Sikhism, and briefly covers the tenets of faith of Zoroastrianism and Jainism. This course surveys the basic beliefs and practices of these religions. It is designed to help the learner be aware of other religious traditions in our community and so be better informed of the religious melting pot around us.

An introduction to the communication, which takes place when people of different cultures interact. This course surveys differences in cultures, which can create obstacles to understanding and communication and offers suggestions for dealing with these obstacles.

SOCIAL RESPONSIBILITY
Select 1 of the following.

This course examines the type of leadership that is required to create and maintain high levels of performance in organizations. Students will be encouraged to understand their personal leadership style and how to use that knowledge to build supportive and collaborative relationships with peers and to enhance the abilities of employees.

An overview of the components of the U.S. criminal justice system - police, courts, corrections, probation and parole - with a general survey of current problems, trends and cross-cultural comparison.

Punishment has always been a part of the fabric of American society. The purpose of this course is to study the nature, functions (and dysfunctions) and causes of punishment within the United States. We examine the interrelationships between penal control, corrections and other means of punishment and the role of race, poverty, the media, corporations and state agents in shaping all of them.

Choose 10 elective courses that are 3 credit hours each.

Enrolling at SNU is a simple process. With rolling start dates, there’s no need to wait months at a time to begin your educational journey. Plus, our generous transfer policy and prior learning assessment can shorten your path to graduation. Once you are ready, take the following steps:

You will be contacted regarding any supporting materials we may need. Upon acceptance, your student success advisor will help you enroll and prepare for success as an adult student at SNU. 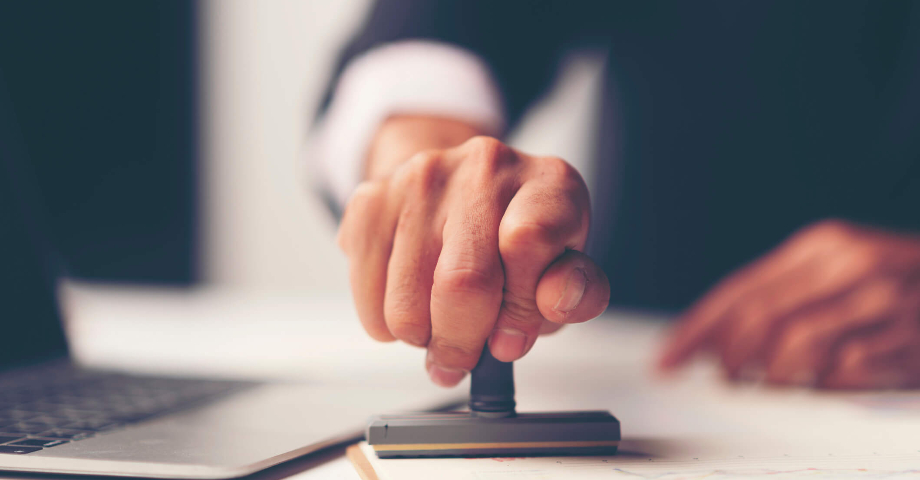 Everything You Need to Know about College Transcripts 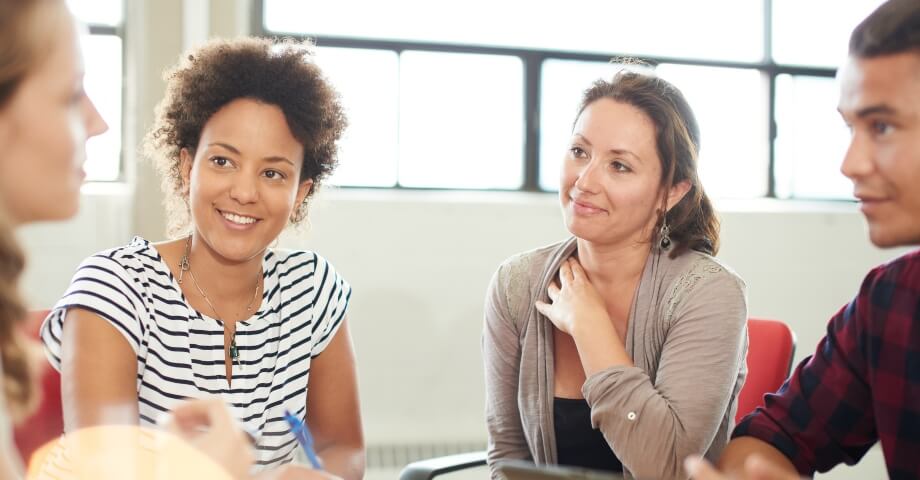 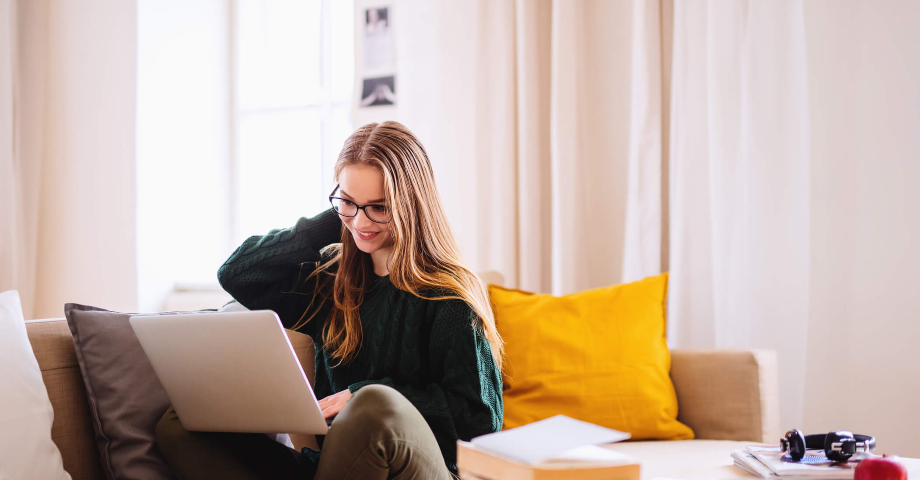 Why a Recession Is a Perfect Time to Restart Your Career 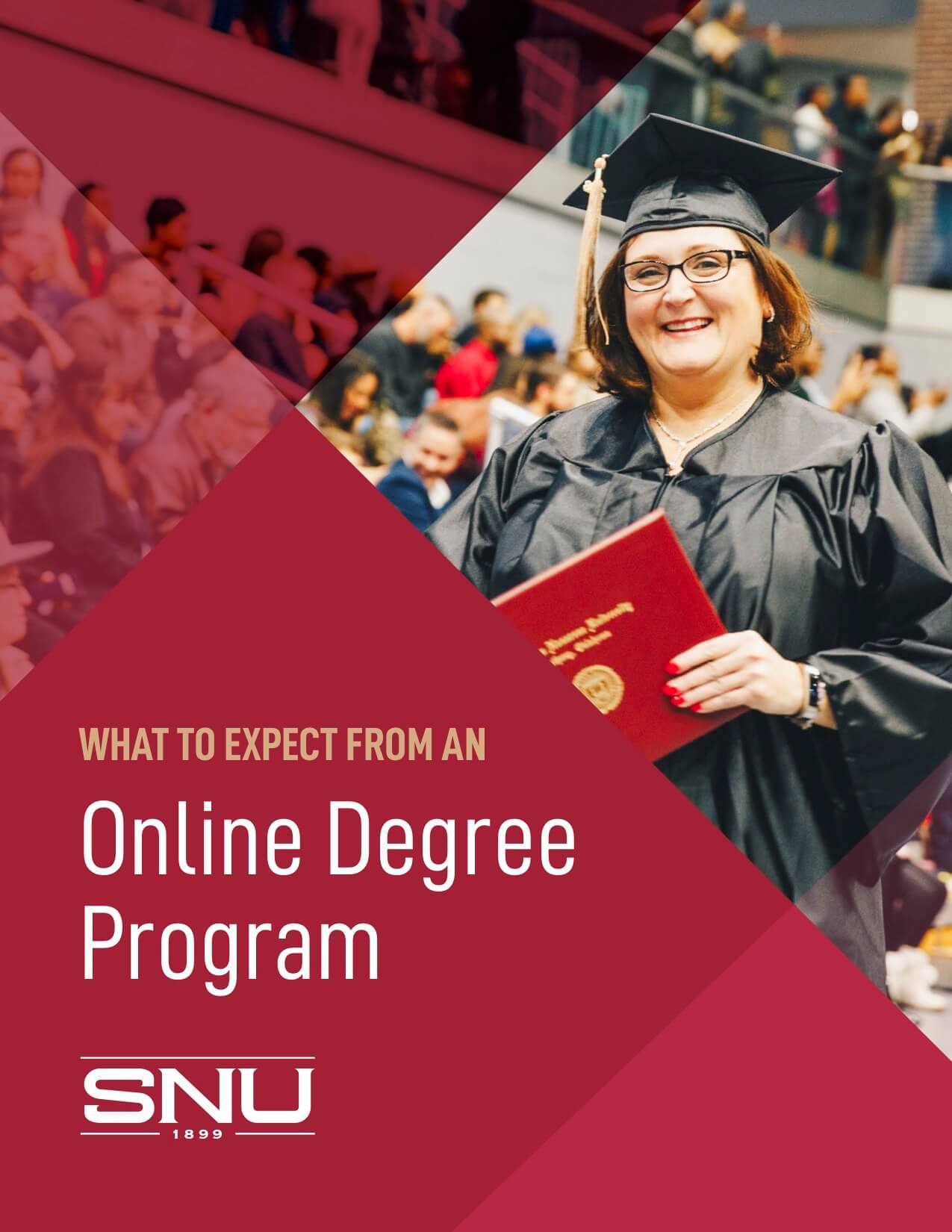 What to Expect from an Online Degree Program 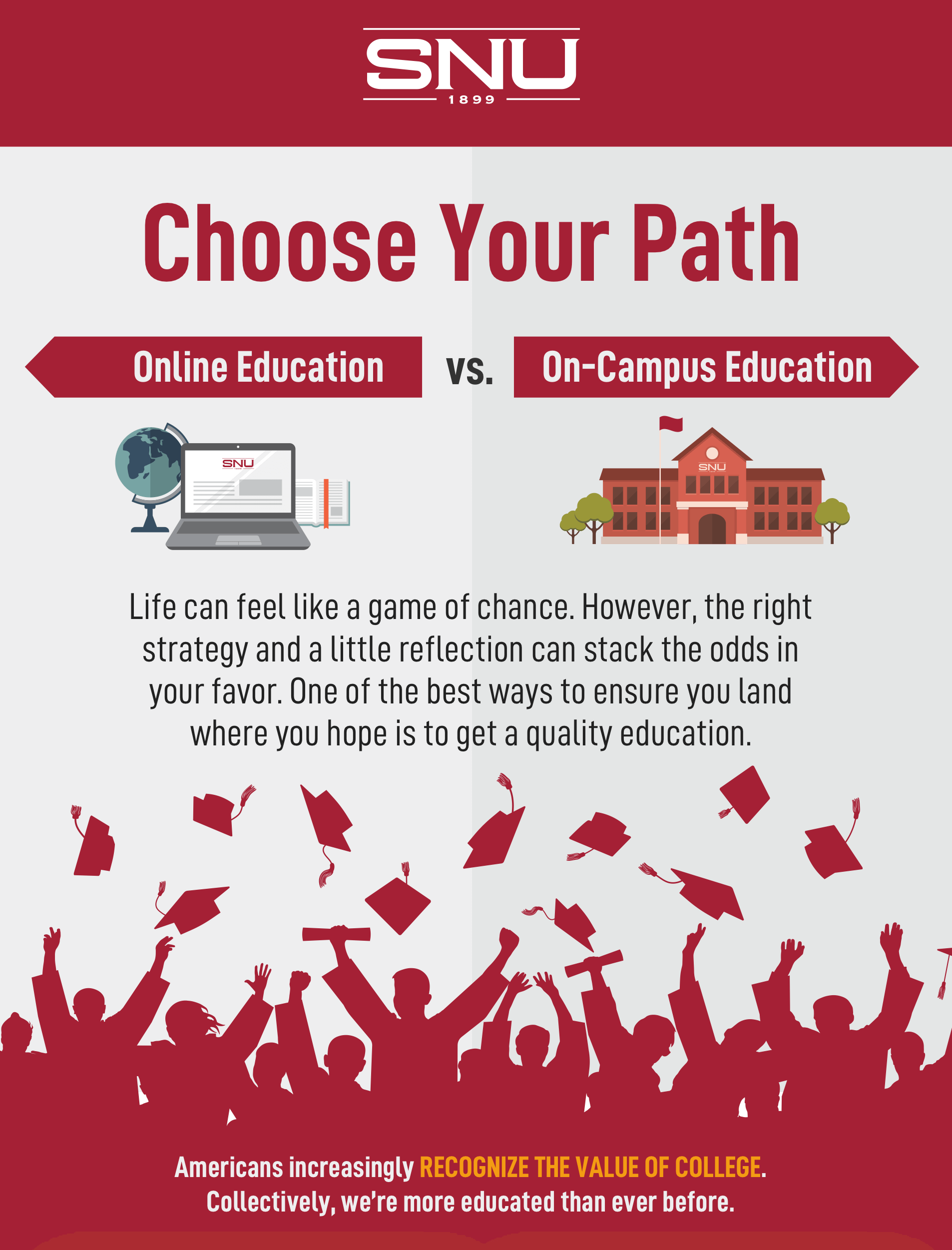 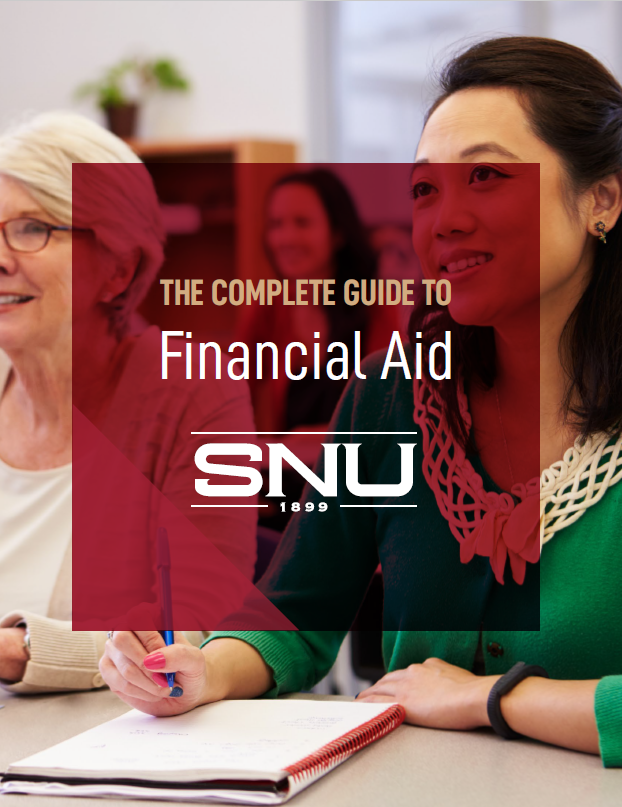 The Complete Guide to Financial Aid

Getting started is easy

Ready to apply? It takes 5 minutes!

Text With an Enrollment Counselor

Prepare to take the next personal, educational, and professional step. Text with an enrollment counselor to learn more about our Associate of Arts in General Studies program.

Have questions about SNU or need help determining which program is the right fit? Fill out the form and an enrollment counselor will follow-up to answer your questions!

Text With an Enrollment Counselor

Have questions, but want a faster response?  Fill out the form and one of our enrollment counselors will follow-up via text shortly!